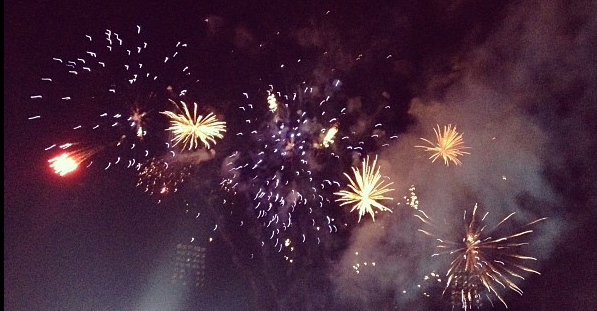 This weekend, the people of the United States go to parks, play and swim, eat hot dogs, and watch red, white and blue fireworks cascade, explode, and spill down dark night skies. The Fourth of July celebrates the signing of this nation’s Declaration of Independence from England and George III in 1776.

We come to Independence Day 2013 recognizing that “all men” includes all women and people of every color and their right to vote. We come amid polarizing tensions in our nation on the size of government and ammunition clips, but we rise together for the color guard that leads the hometown parade.

The common good requires negotiation, listening to people unlike ourselves and giving people who are poor a voice. Like James and John in last Sunday’s gospel, many of us are willing to call down fire from heaven to destroy those with whom we differ.

The Fourth of July calls for fireworks of a different kind – involved citizens. As we gather with crowds to watch rainbow colors spill across the sky, we can commit to participate in our democracy, to talk to our neighbors, agree and disagree, dialog with legislators, build coalitions, and seek the common good together.

Enjoy this blessing for Independence Day and have a safe and happy holiday weekend!

Good Ground Press is the publishing ministry of the Sisters of St. Joseph of Carondelet. We publish resources for living the Gospel today, including Sunday By Sunday for adults and SPIRIT ONLINE for teens. View more posts